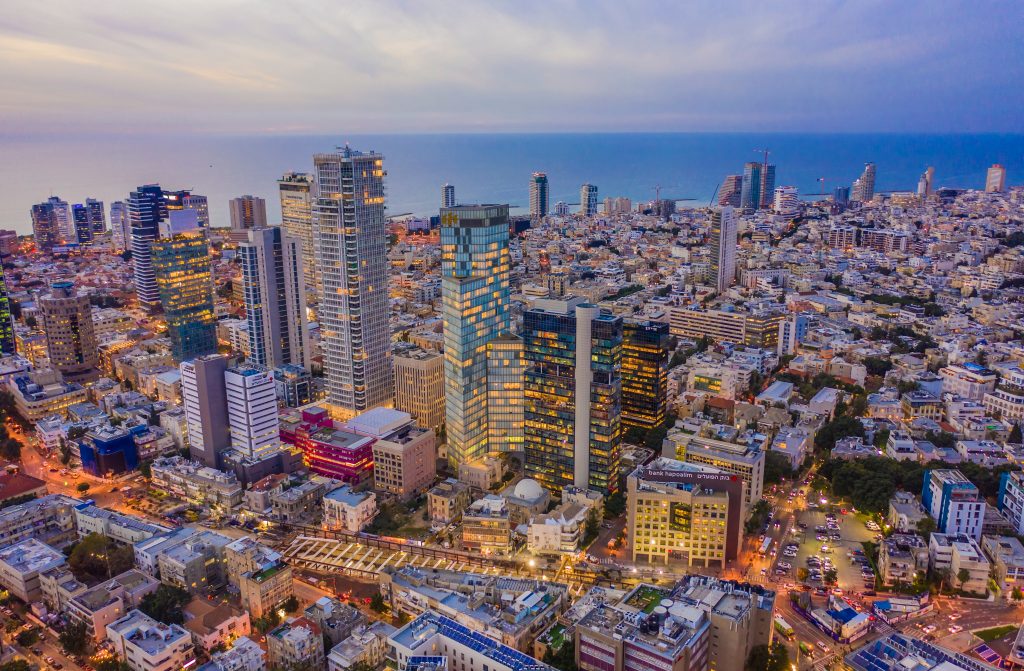 Tel Aviv (or Tev Aviv-Yafo, which is the official name of the municipality) is the financial and technological center of Israel. Situated on the eastern Mediterranean coast, it was founded in 1909 by the Yishuv, as a modern development on the outskirts of the ancient port city of Jaffa (Yafo).

Tel Aviv and Jaffa (Jafo, in Hebrew) merged into a single municipality in 1950, two years after Israel’s Declaration of Independence.

The White City of Tel Aviv, a UNESCO World Heritage Site in 2003, comprises the world’s largest concentration of international-style buildings, including the Bauhaus and other related Modernist architectural styles.

Tel Aviv is a very relaxed and tolerant city, in contrast to the very conservative and religiously overwhelming Jerusalem. The moment you step foot in the city you have the feeling of having been here before. Everything is casual, but organized. The city’s club-café vibes are ubiquitous and the beach culture is what truly defines the city.

Tel Aviv is the most populous city in the Gush Dan metropolitan area in Israel. Located on the Israeli Mediterranean coast and with a population of 460,613, it is the economic and technological center of the country.

When you walk through the center of Tel Aviv, you have the feeling of being in a city with tree-lined streets and outdoor cafes rather than a big city.

The city is known as “the Mediterranean capital of cool” and a global hub for tech startups, but also as one of the greenest cities in the world.

The best time to visit Tel Aviv is undoubtedly spring and fall, when the weather is simply delightful. Summers in Israel can be harsh, but don’t worry: bring light (or very small) clothing, speedos, lots of sunscreen, hats and of course, your surfboard. After all, Tel Aviv is synonymous with beach culture.

Places that you can visit together with your dog. Do not forget to always carry fresh water with you, especially during the summer.

The port of Tel Aviv, also known as Namal Tel Aviv, opened its doors in 1936. Today, the Namal is an area of ​​culture, entertainment and leisure activities. A huge wooden platform acts as a promenade that runs along the boardwalk. Shaped like waves in the sea, this unique promenade fills with people, especially when the weather is good, just like the rest of the port.

Yarkon Park (Hayarkon Park)
Tel Aviv’s «green lung», which opened to the public in 1973, is incredibly huge. The Yarqon River, with its glistening waters, runs through the park and empties into the Mediterranean Sea. Most of the park is north of the river, but the south bank also has a good part.

Dizengoff Street is one of the oldest streets in Tel Aviv and a main artery. It’s a tree-lined shopping street lined with restaurants and cafes.

The largest public square in Israel is located behind the steps of the city hall. This square hosts many demonstrations and public events, often with the attendance of tens of thousands of participants.

Rothschild Boulevard is one of the most important and iconic streets in Tel Aviv. It is a commercial center, with major financial institutions along the street, a cultural center, a culinary center, and a leisure center.

It has an area for dogs, where you can enjoy the sea with your furry friend.

This post has been written based on the travel blog experiences of Kostas Xiloparkiotis around the world.

If you want to know more about Kostas and his travels, please follow him on Instagram and his amazing blog.