The name Samoyed comes from the Samoyed people (also Samodeic people), a semi-nomadic people from Asia who migrated to Siberia a thousand years ago, from the Sayantsi family. There dogs were bred for work in the coldest habitable places on earth. (In the Siberian city of Oymyakon, for example, temperatures of -60 degrees below zero are common.)

The Samoyede people lived in tents and huddled together for warmth with their packs of dogs during arctic nights. This kind of human-canine cooperation for mutual survival forged a close bond between Samoyed dogs and people.

When not sledding heavy loads across vast stretches of Siberia, Samoyed dogs earned their food as guard dogs and hunters. Samoyede relied on reindeer for a vital source of food, fur, and leather. At first, they used their dogs to hunt reindeer. But over time, the Samoyede culture shifted from hunting reindeer to herding it. The bold white hunting and carrier dogs found a new role as stock dogs, moving and protecting herds.

In the late 18th century, Arctic explorers returning to England introduced the Samoyed to British dog lovers. Queen Alexandra was an admirer who did much to promote the breed as a companion and show dog.

In America, a brilliant white dog named Moustan de Argenteau made history in 1906 as the first of the breed (then known as the Samoyede) to be registered by the AKC.

Samoyeds are generally healthy dogs. The Samoyed’s teeth should be brushed frequently, using a toothpaste designed for dogs. Regular visits to the vet for checkups and parasite control help ensure that the dog lives a long and healthy life.

Samoyeds shed quite a bit all the time, even more so during the molting season, which can happen once or twice a year. Daily brushing will help remove dirt and loose hair and keep the dog looking its best. Mats or tangles can be groomed with a slicker brush or metal comb. Nails should be trimmed every three to four weeks or as needed. 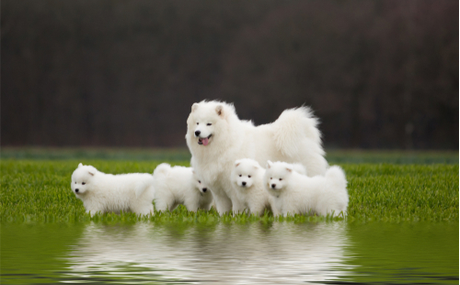